Wine House LLC has been established by Garush Samvelyan in 2011. Company is producing exclusive wines using principally its own grapes. Vineyards are located on 10 ha plot of land in village Aghtsk, Aragatsotn province. The Company cultivates ancient indigenous and new generation grape varieties of Armenia on its vineyards. 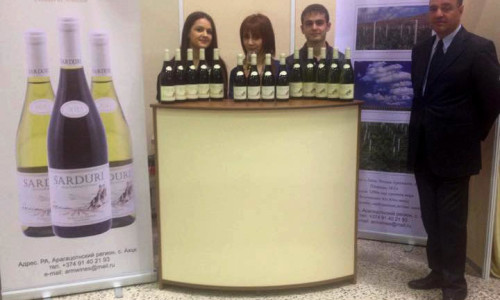 History of Winemaking in Armenia dates back to the time immemorial which is proved by a wealth of historical discoveries and artifacts. A vast number of karases (clay jars) (1000-1200L) found during excavations around the fortress Teyshebaini, (Erebouni 7C, B. C), which is the current capital of Armenia, Yerevan, come to prove that Wine making was a well-developed industry in Armenia millennia ago. It is hard to imagine that a family would make such huge volumes of wine for family consumption.

Pieces of sulphur unearthed in the ancient winemaking site indicate that the Urartian (a state on the territory of Ancient Armenia) winemakers were well aware of the antiseptic properties of the gas extracted from burning sulphur. A remarkably advanced winemaking operation was discovered in Armenia in 2011, in caves, surrounded by wine press, fermentation jars, storage jars, wine cups, dating back 6,000 years.

Scientists also found grape seeds, residues of pressed grape and dozens of dried pieces of vine. The study of the seeds indicate that the grapes used for winemaking were Vitis Vinifera (varieties of cultivated grapes used in modern winemaking). The seeds found are identical with indigenous Armenian grape variety Voskehat (Kharji), which is widely cultivated in Armenia now.

Armenia is among the handful countries where vines were not affected by Phyloxera (grapevine pest), to be more exact only a small part of northeastern part of Armenia was affected. Ararat valley is the main winegrowing area of Armenia, located at the foothills of the Biblical Ararat Mountain, which accommodates over 80% of country’s grape growing.